Laurence Fox’s appearance on BBC Question Time certainly set off a social media debate on ‘white privilege’ and what it does or doesn’t mean. As users of social media will be aware this rarely ends up with measured argument, where opinions are respectfully countered and true to form it didn’t let us down in this case.

The original question put by the audience member was innocuous: Should the Sussex’s profit from their Royal status? Having listened to the full recording a number of times Fox’s comments on the question were initially pretty measured. (For the purpose of this blog I’ll ignore his flippant comment he made on the climate crisis in reaction to a previous question on flying – and he did at least partly redeem himself by pointing out the hypocrisy of actors who lecture us on climate change).

“Let’s be really clear about what this is, let’s call it by its name, it’s racism.”

“We’re the most tolerant lovely country in Europe, it’s not racism”

This audience member clashes with actor @LozzaFox over the treatment of Meghan, Duchess of Sussex. #bbcqt pic.twitter.com/ZwANAlCBbA

The crucial exchange was when the question was opened up to the audience and the exchange between Rachel Boyle and Laurence Fox shown in the tweet above occurred. The audience member believed that the treatment of Meghan Markle was racist (my personal view is I agree in relation to the press coverage it is) and Fox responded that it wasn’t. Of course the main issue here wasn’t whether the press were being racist towards Meghan Markle, but surrounded the accusations of ‘white privilege’. I believe it’s clear from the exchange that Fox doesn’t understand what white privilege actually means.

He did, correctly obviously, state that he was a white male and he couldn’t change that, but in the next breath stated that it’s racist to be described as such. Importantly a few minutes later in the programme Fox stated “that you should be careful and not call some racist just because they don’t agree with you” a clear reference to the earlier conversation and an indication that he believed (incorrectly) he was being called a racist by the audience member, who he in turn accused (again incorrectly) of being racist towards him.

Before we get into the rights and wrongs it’s worth setting out the definition of what white privilege is as, trawling through social media it’s clear there is a lot of ignorance on this.

“White privilege is the societal privilege that benefits people whom society identifies as white, beyond what is commonly experienced by non-white people under the same social, political, or economic circumstances.

I am a white middle aged man and I most certainly have white privilege. This doesn’t mean that I’ve had things handed to me on a plate, and I’ve set out in earlier blogs some of the issues that I have faced, but none of these issues were due to the colour of my skin and I haven’t faced the relentless overt and far more subtle forms of racism still present in today’s society. If you are white you have white privilege, you can’t not have it. It doesn’t mean that there aren’t other forms of privilege to do with class and gender, but the experiences of people of colour, from slavery to segregation to apartheid to Windrush to name just a few examples surely places it at the top of the pile.

I read a number of social media posts (often with Caps Lock stuck on) from people who said they’d struggled all their lives, faced this, that and other issues – and how dare they be accused of white privilege. I had a more measured reply to one of my tweets asking if the troops who fought in the Somme have white privilege. In both cases they have misunderstood what white privilege actually is.

While I don’t believe he was being racist, Fox lost a great deal of credibility when he stated we are the most tolerant, lovely country in Europe and it (the treatment of Meghan Markle) wasn’t racism, even the Daily Telegraph journalist said “there’s no doubt there’s been a great deal of racism”. For the record I’m incredibly proud to be British, proud of its people, its history (well most of it) and its many institutions such as the BBC and our armed forces. I believe that British people have a deep sense of fair play, but we can’t deny that racism is still present across society, particularly in areas such as the press and also government, as evidenced by the Windrush scandal. Further, there is no doubt that the comments of certain politicians and relentless scapegoating of migrants by sections of the media has stirred up hatred where there was previously none and made some people far more comfortable in expressing their latent racism.

While of course Fox is entitled to his view, we should be very cautious when we arrogantly dismiss other people’s views when we have no experience of life from their point of view and in this case the experience of being a person of colour. Yes we can’t help being white and we won’t be able to experience it or fully understand it, but we are capable of empathising – if we listen. Obviously Twitter isn’t necessarily the best medium for listening, with its polarised views, but you can find some gems of information if you look carefully and filter out the noise.

Talking of Twitter, I probably received the most vitriol I’ve ever received on social media (and as a two time General Election candidate I’ve received a fair bit!) following my posts on this issue. The greatest upset was my response to Fox’s tweet below: 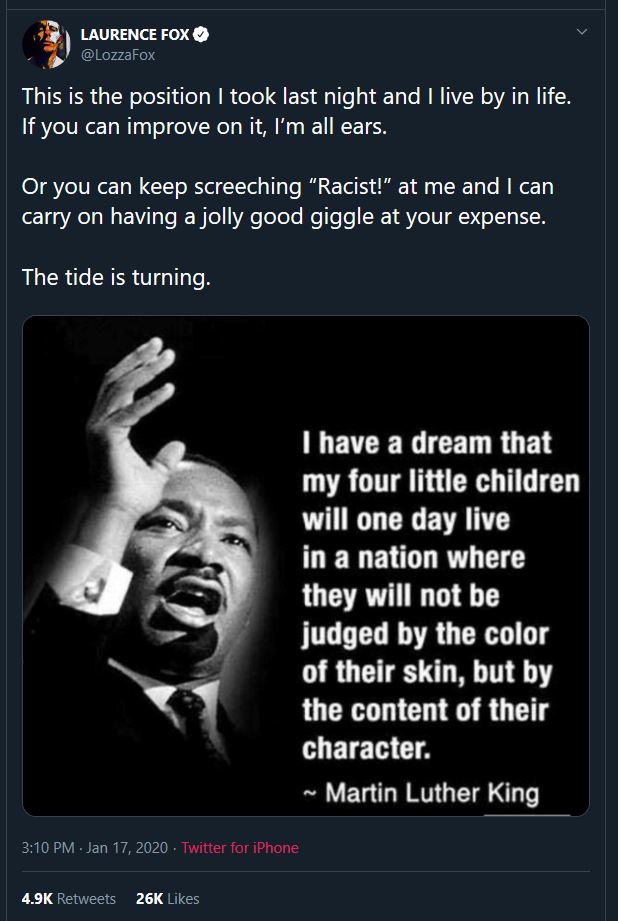 Again I don’t believe Fox was being judged on the colour of his skin, but rather by the views he expressed on whether something is racist or not. He can and should be allowed to have a view on it, but he can’t claim to be an authority on it, as he is not in a position to do so. It is not racist of the audience member to point this out, it is in the same words as Fox used in the programme ‘an immutable fact’.

Of course no reasonable person would disagree with Martin Luther King’s quote above, but it was, in my view, Fox’s clear misunderstanding of the content of the discussion he had on the programme that made the use of the quote inappropriate in this instance. At the same time it does not mean he doesn’t genuinely hold this view. When sending out a draft of this blog it was highlighted that quoting a black civil rights activist held in such high regard to justify a flawed argument is as a key disarming tactic to cheapen the views of people of colour who have called out his stance.

While writing this, Fox’s comments have come to light about the inclusion of a Sikh soldier in the WW1 film ‘1917’. Fox commented that it was a great film “apart from the gratuitous Sikh” further stating “it’s just incongruous with the story”. In the same conversation talking more generally about people of colour in films Fox states “there is something institutionally racist about forcing diversity on people in that way”. Fox was seemingly unaware of the huge contribution and sacrifice made by Sikh soldiers and others from the Indian sub-continent. Sikhs made up 20% of the volunteer force and 74,187 Indian soldiers died fighting for the British in WW1. While I’m always happy to give people the benefit of the doubt, there is a stack of evidence mounting up…

Whatever your views on Brexit, let’s not go there, it’s indisputable that it has caused a huge rift in our society and once again made it more acceptable for racist opinions to be freely voiced. The polarisation of our society is entrenched and a solution is unlikely to be found in the battleground of social media and in 280 characters, but a solution must be found. Politicians and others in positions of influence have a responsibility to set the tone. However, we all have a part to play and we must challenge racism wherever we find it, but as naïve as it may sound we have much to gain by talking a little less and listening a little more.