Since ‘Access for All’ funding for accessibility improvements to the UK rail network was introduced in 2006, around 200 stations have been made step-free. However, much of the UK rail network remains a no-go area for disabled people. Leagrave station in Luton, Bedfordshire is one of the busiest stations in the UK that is still practically inaccessible to wheelchair users, those with reduced mobility and parents with young children.

This blog sets out the specific issues at Leagrave, what criteria are used to decide which stations receive funding and an example of a successful campaign.

Leagrave is one of three rail stations in the city of Luton and serves the North of Luton as well as nearby Houghton Regis and Dunstable. The other two stations in Luton are ‘Luton Airport Parkway’, which serves the nearby airport and ‘Luton’, which is located in the town centre. Luton station was originally awarded ‘Access for All’ funding in 2014, although this funding was later deferred in 2016 by the ‘Hendy Review’ to the current railway Control Period 2019-2024. The access improvements at Luton will form part of a wider redevelopment in the area. At this time Luton Airport Parkway is the only step-free station in Luton.

Leagrave station has four platforms, as set out in the diagram below. Trains towards London and beyond to Gatwick etc. leave from platform one. Trains from London and heading further North stop at platform two. Platforms three and four are pretty much redundant as the two tracks serving these tracks are for East Midlands trains that don’t stop at the station. This same set up, with slight variations, is repeated at other stations on this section of the line such as Harlington and Flitwick.

Of the four platforms, only two have step-free access – platform one and platform four. Platform one is for trains to London and wheelchair users are able to board a train and travel with relative ease, although they still need a ramp. However, on the return trip a wheelchair user will arrive at platform two, which can only be exited by using a set of stairs. Therefore, as virtually every journey involves a round trip, this station is unusable for wheelchair users and those with restricted mobility. It is also an assault course for parents with children in buggies who either bounce the buggy up the stairs with their child in it (not recommended) carry a buggy in one hand and their child in the other (hardly ideal or safe) or wait for a helpful fellow passenger.

Leagrave does have an accessible toilet, but it is located on a platform at which no trains stop. This really is just ticking a box, without any thought to the actual needs of wheelchair users and those with reduced mobility.

Below are passenger numbers (from highest to lowest) for every station in Bedfordshire. Leagrave station has around 1.8m passengers per year and is the most heavily used station in Bedfordshire that has not been allocated ‘Access for All’ funding to provide step-free access. Just on this criteria alone Leagrave should be at the top of the list for step-free improvements, but there are many other factors by which a station gets allocated funding.

Looking through the list above I am confident, having spoken to them, that any bid for Leagrave will have the support of the current TOC (Govia Thameslink Railway) that manages the station. It will certainly have our (Bedfordshire Rail Access Network) support and we have already had a very positive meeting with the local MP, Sarah Owen, who has personal experience of the accessibility problems at the station. As I pointed out above, Leagrave certainly has the required footfall to be considered for funding. Our campaign will seek to engage local community support as well as support of the local council, more details on how we achieved this for the successful bid for funding at Biggleswade station below.

The number of ‘passenger assists’ relates to the requests for ramp assistance at the station as well as taxi requests for those that cannot use the station. I’m not sure how accurate or useful this information is, as many potential travellers may just not bother attempting to travel and the inaccessibility of platform two at the station will discourage most wheelchair users from using the station.

‘Match funding’ relates to pots of cash that may be made available by local councils or regional development organisations. Obviously if the Department for Transport (DfT) can avoid footing the entire bill, they may look more favourably at a scheme.

The DfT will also look at the nearest fully accessible station to the one bidding for funding. If there is no alternative nearby, then this will be a factor in ranking that particular bid higher in the list of stations. In the case of Leagrave the nearest accessible station is currently Luton Parkway. Although Luton and Flitwick stations have been granted funding in principle, they are some way off from completion.

Finally the bid matrix also looks at any local factors that would increase the numbers of people with disabilities using the station. Although not within the 800m range indicated in the list, it is worth pointing out that Leagrave is the nearest rail station to Luton and Dunstable hospital which is 1.6km (1 mile) away.

On the basis of the above it seems that Leagrave has an extremely strong case, but nothing is ‘in the bag’ until a successful bid has been announced, and even then there can be issues, as the long suffering users of Luton station which was first granted funding back in 2014 will be sure to point out.

Our successful campaign for funding for Biggleswade started many years ago and we as the BRAN campaign team are just finishing off the work started by other campaigners. We became involved back in 2017 and we weren’t the first campaign. Below are some of the steps that we took to assist with what was ultimately a successful bid.

Petitions may seem a bit old hat these days, and there is always a suspicion that they are mainly used to get you on a mailing list, however they do give a useful indication of the level of support for your campaign and is something concrete that indicates community support. They are also a great way of getting publicity for your campaign as it gets shared out across social media.

Perhaps the most important step is to get a seat at the table with the people who put the bid together. In the case of the Biggleswade campaign this was with Network Rail, GTR, local and town councillors and Alistair Burt, the local MP at the time. This is not an easy step and it took some negotiating to achieve, the first offer was just allowing one person from our campaign team to attend a meeting! However, I have to say that Alistair was very supportive of the campaign and although we were political adversaries, having ran against each other in the 2017 General Election, we worked very well together throughout.

I am just the spokesperson for BRAN, and we have wheelchair users and visually impaired people on our team who provide ‘lived experience’ and expertise in accessibility issues. Until we became involved there was no-one sitting at the table who would actually directly benefit from the improvements that were being proposed.

Through various political connections, the lack of step-free access at Biggleswade station was raised in the European Parliament, as well as in the House of Commons and again this fed into providing more publicity for the campaign. We were also delighted to welcome the Shadow Transport team to Biggleswade for a site visit, which in turn was reported in the local press. We soon became the focal point for any accessibility issues and would be contacted by local radio and TV for our comments.

The main aim of the campaign was to make sure that as many of the criteria were met as possible, and ensure that there was a groundswell of support and publicity that would make it difficult for the bid to be rejected. If local councillors, MPs and the Train Companies know that they are going to get a difficult time if a bid is turned down it does tend to concentrate minds.

Above all, we were aware that we couldn’t do it on our own and needed to work with all the other stakeholders to maximise the chance of success. This doesn’t mean being a pushover, and we were not hesitant in firmly putting across our case, but it was done with respect for other views and awareness that you rarely get everything that you want.

It is also a challenge to manage expectations. Nothing involving the railway takes place quickly. Add in all the other interested parties and everything seems to take an age. There are no quick wins here and you should cater for being in it for the long haul. Taking our Biggleswade campaign as an example, we began the campaign in 2017 and we expect the station to be step-free in 2022.

Where there isn’t the same level of collaborative working, political support or sense of urgency, bids do fail. Flitwick station was a prime example of this, failing in the original application, and only given the go-ahead after additional funding was made available.

Even when a bid is successful such as Biggleswade (announced on April 2019) there is still much work to do as potential designs are looked at in greater detail. This is where it is vital that people with disabilities are involved so that problems aren’t designed into the development, which become very difficult to correct at a later stage. We continue to meet on a regular basis with Network Rail, Richard Fuller MP and others and the design team have accepted a number of alterations that we have put forward.

As far as Leagrave station goes, we will look at all available options for funding. We have already indicated to GTR that we view Leagrave as a priority (along with Arlesey station) and we will make sure that we have a seat at the table when these are being discussed. At every meeting we will be guided by the four principles set out below:

If you’re campaigning for step-free access for your local station, or thinking of doing so, we hope the experiences set out above will be of some help. However, we don’t claim to have all the answers and we are learning all the time. Do get in touch if you have campaign ideas, or just want some moral support. These campaigns are ‘slow burners’ and it can often seem that you are banging your head against a brick wall. However, the prize of an accessible station, removing the barriers that prevent people with disabilities from playing a full part in our society is most definitely one worth fighting for. We’re up for the challenge and trust you are too!

You can email us at: bedsrailaccessnetwork@gmail.com

2 thoughts on “It’s time for a step-free Leagrave!” 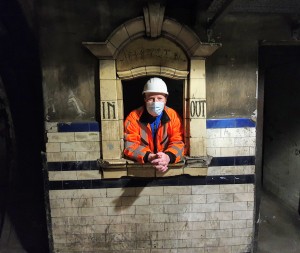